Proposed DHS Rules May Cause The Deaths They Claim To Prevent

Back at the end of March, the Department of Homeland [in]Security issued rules stating that all electronics larger than a smartphone should be checked instead of kept in a carry-on on flights into the US from 10 airports or on 9 airlines from mainly Muslim countries in the middle east and north Africa. This was following claims by US and UK intelligence that terrorists are smuggling explosive devices in various consumer items to ‘target commercial aviation‘.

Not only does this not pass the smell test — anyone looking to bring down an aircraft with explosive devices won’t care if they’re in the cabin or the hold: boom is boom. The idea that items are going to go through some sort of super-secret screening is laughable, when red-team penetration tests find it trivial to get prohibited items onto aircraft (including via people with no ticket who bypass security screenings). And, of course, airports already require carry-on electronics to be x-rayed, and often swabbed for explosive residue. What’s more, I remember seeing ‘explosives smuggled on board’ hysteria since Pan Am 103 almost 30 years ago, where Czech explosive Semtex was suspected to be in everything from fake muesli to electronics following the use of just 12 ounces (340g) to blast a 50cm hole in the 747’s hold.

A more “credible” theory is potential “cyber warfare” (a pox on that term). With electronics out of sight of the passengers after check-in, access to them is far easier for ‘security services’. As well as allowing easy access to snoop on passenger electronics and data, there is a potential for far more nefarious actions in the tradition of Stuxnet.

Stuxnet was a worm that targeted a certain Siemens industrial control system primarily used by Iranian nuclear centrifuges. However, it spread via infected USB drives to computers, and from those computers to other USB drives, all the while using rootkits with compromised digital signatures to hide. It essentially used a digital version of ‘6 degrees of separation‘ to eventually infect its target. What better way to spread similar malware than to infect a bunch of computers on flights to the target country? It’s not just laptops either, cameras need memory cards and are just as easy to infect. As a theory, it’s got a lot to commend it, but that’s beside the point, because, remember, this is about ‘safety’ and people not taking bombs into aircraft cabins.

So fast forward to the present, and while expanding the ban has been kicked about, a JetBlue flight has shown the incredible danger of requiring electronics to be put into bags that often are kicked about. 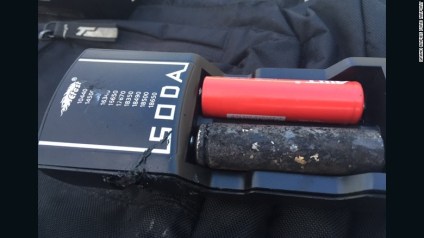 May 30th’s JetBlue flight 915 (NY JFK to San Francisco) had to make an emergency landing in Michigan after a AA lithium battery in a backpack started to smoke. When it was noticed, the backpack was moved to the aircraft bathroom which presumably dislodged whatever was causing the short. Luckily that was enough to prevent the fire from getting started, which would have soon gotten out of control.

And therein lies the problem. Lithium battery fires are very dangerous, and one of the things that make them more dangerous than most other fires is that most of the things you’d do by instinct to put out a fire (smother it, put water on it) actually makes them worse. Realistically, the only way to deal with a lithium fire is to stop it before it starts, and while that happened this time, if it were in the hold we’d be looking at a downed Airbus A321 with 158 dead.

Airlines know this and have for a long time. In 2000, I tried to fly with 2 batteries in my checked baggage from the UK to San Francisco with Virgin, and to Las Vegas with TWA. The batteries, Hawker (now Enersys) SBS40‘s were 38Ah, 12v batteries (yes, you can easily start a car with them) and were packed safely into my checked baggage as well as being certified safe for air travel (they won’t leak if tipped or punctured). Virgin had no problems, but TWA flatly refused, citing a risk of fire in the hold (and at 28lb/12.7kg each, carry-on wasn’t an option)

Now bear in mind this is a battery designed for rugged use, puncture resistant and safe (which is why they were used in Battlebots entries, which is why I was taking them, for the Suicidal Tendencies team), in a fire-resistant case where the only available fuel might be some small amounts of hydrogen gas, and whatever items are around. Lithium batteries generally don’t come in rugged fire-resistant cases, provide their own fuel, and worst of all, physical damage (such as heavy-handed baggage handlers) can cause such damage.

If you want a more specific example of the risks, just cast your minds back to last year and the Samsung note7. With just the potential for a fire with note7 battery, they were banned from aircraft for safety reasons. They weren’t consigned to the hold, where they can cause problems without anyone noticing. 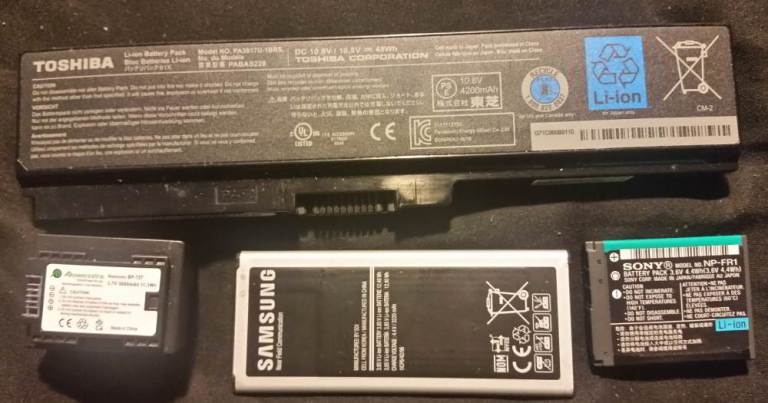 That’s a laptop battery, a digital camera battery, a phone battery and a video camera battery (I have 4 of these). One of them is 10 years old, that’s how long these batteries have been out there. 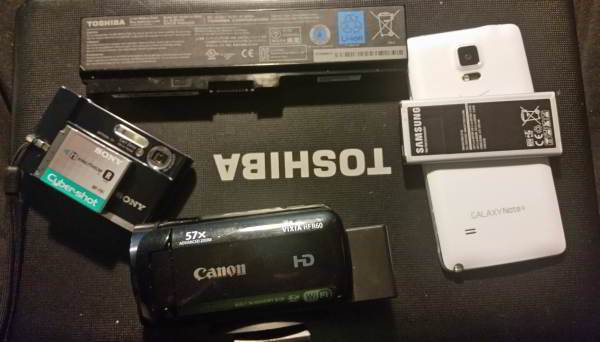 Any of these can cause an uncontrollable fire if mishandled (and sometimes, just from age). What’s more, any of these devices wouldn’t take much to rig with a short-range detonation using nothing more than their own battery as the bomb. A bomb which will pass all the cursory security checks because there are no obvious chemicals (RDX, TNT, etc) to detect.

As a policy to prevent bombings, it’s not useless, it’s actually WORSE than useless, as it makes it FAR easier to take down an aircraft with electronics, just by accident, let alone by design.

The only people who benefit from this policy were it to be enacted worldwide, would be the computer snoopers, and of course, the many thieves, pilferers, 5-finger-discount shoppers, and general low-life criminals that seem to be employed at most airports in their security/baggage handling/TSA departments. Anyone else is potentially flying corpse-class.

Now, some might say that in this case, having lithium-ion batteries of any kind on an aircraft — whether in checked luggage or carry-on — is a recipe for disaster, and that they should be banned in general. But what I’m saying is that they are more prone to fire through mishandling than other battery types, and that such a fire, once it has started and takes hold, is more difficult to get under control easily. Well-maintained, well-treated batteries are safe if they’re kept in the cabin, as any incident can at least be quickly addressed, as the recent JetBlue incident showed. Requiring they be put into baggage that is dropped, thrown, punted, squished, molested, rummaged through and otherwise mishandled, before being packed tightly into an aircraft hold unattended means that damage leading to a fire is far more likely, and that fire is unlikely to be discovered – let alone extinguished – before it is too late for the safety of the aircraft.

And if you’re wondering how to put out a lithium battery fire when started, the answer is to use a class-D fire extinguisher (which only works on metal fires) but in a pinch, salt (pun intended) or sand can be used. Good luck finding the former, or enough of the latter two at 43,000ft. In a pinch, you can use water in mist form to cool around the battery and bring its temperature down (this can take a LOT of water and time), while also isolating it from any other fuel where possible (which was done in this case). Again, this is not really feasible if the fire is in the hold. Here’s a demonstration of extinguishing a laptop battery fire, and how even when prepared, and waiting for it, with an extinguisher at the ready, it can still take a minute or two to put it out. Most people would be tempted to stop once the flames go out, allowing for re-ignition.

Reposted from the Politics & P2P blog