Huge Protests Across Europe Protest Article 13; Politician Lies And Claims They Were Paid To Be There

As expected, people took to the streets in the EU this week to protest the EU Copyright Directive and the censorship filters of Article 13 and the snippet tax in Article 11. Most of the protests took place in Germany, where reports are that over 150,000 protesters showed up to let their elected officials know that this law is a disaster (other reports put the number closer to 200,000 protesters). 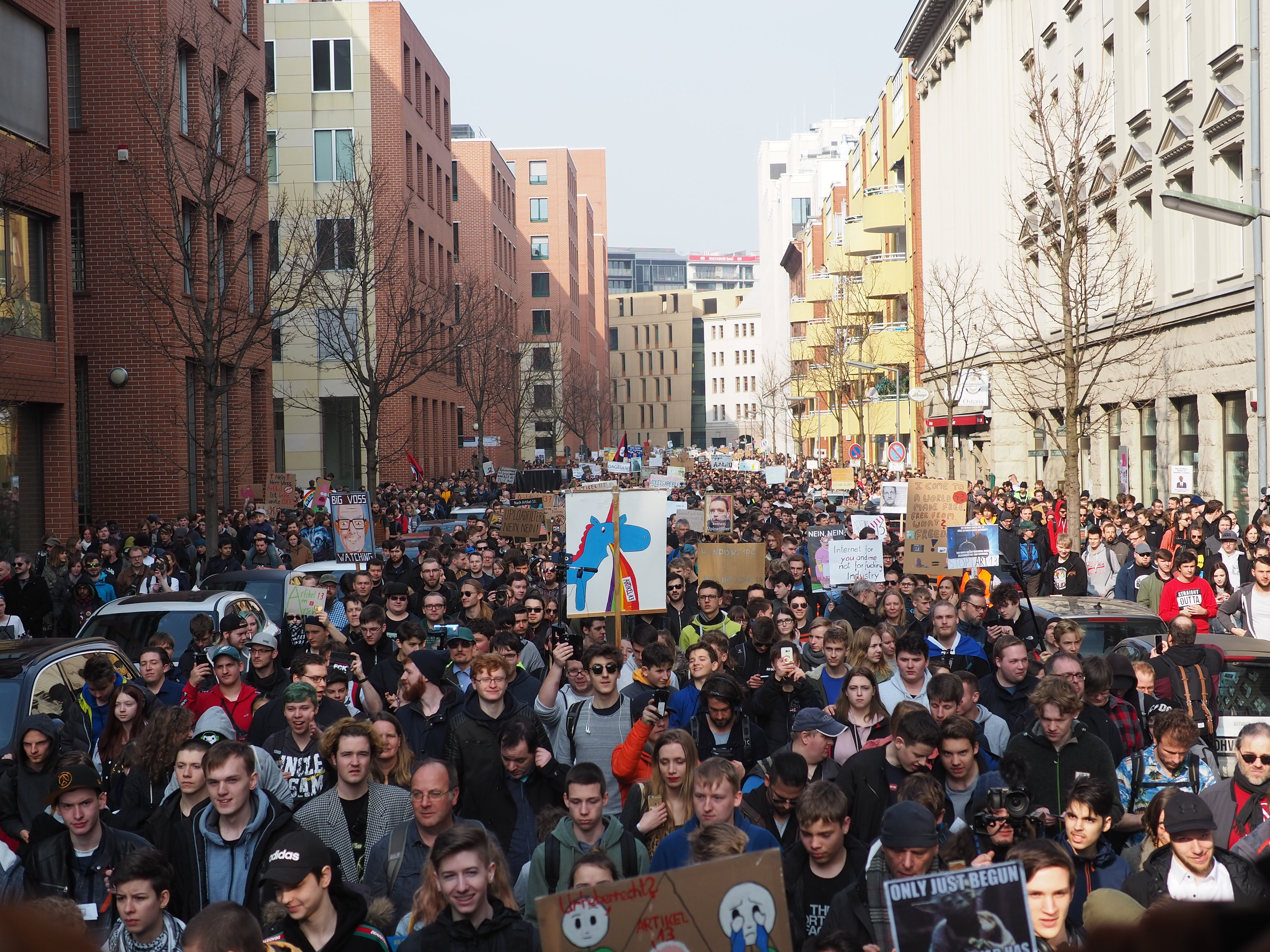 Indeed, things got so crazy, that the Berlin police announced that there were way more people than expected, and protesters needed to change their planned route to roads that could better accommodate such a large crowd. 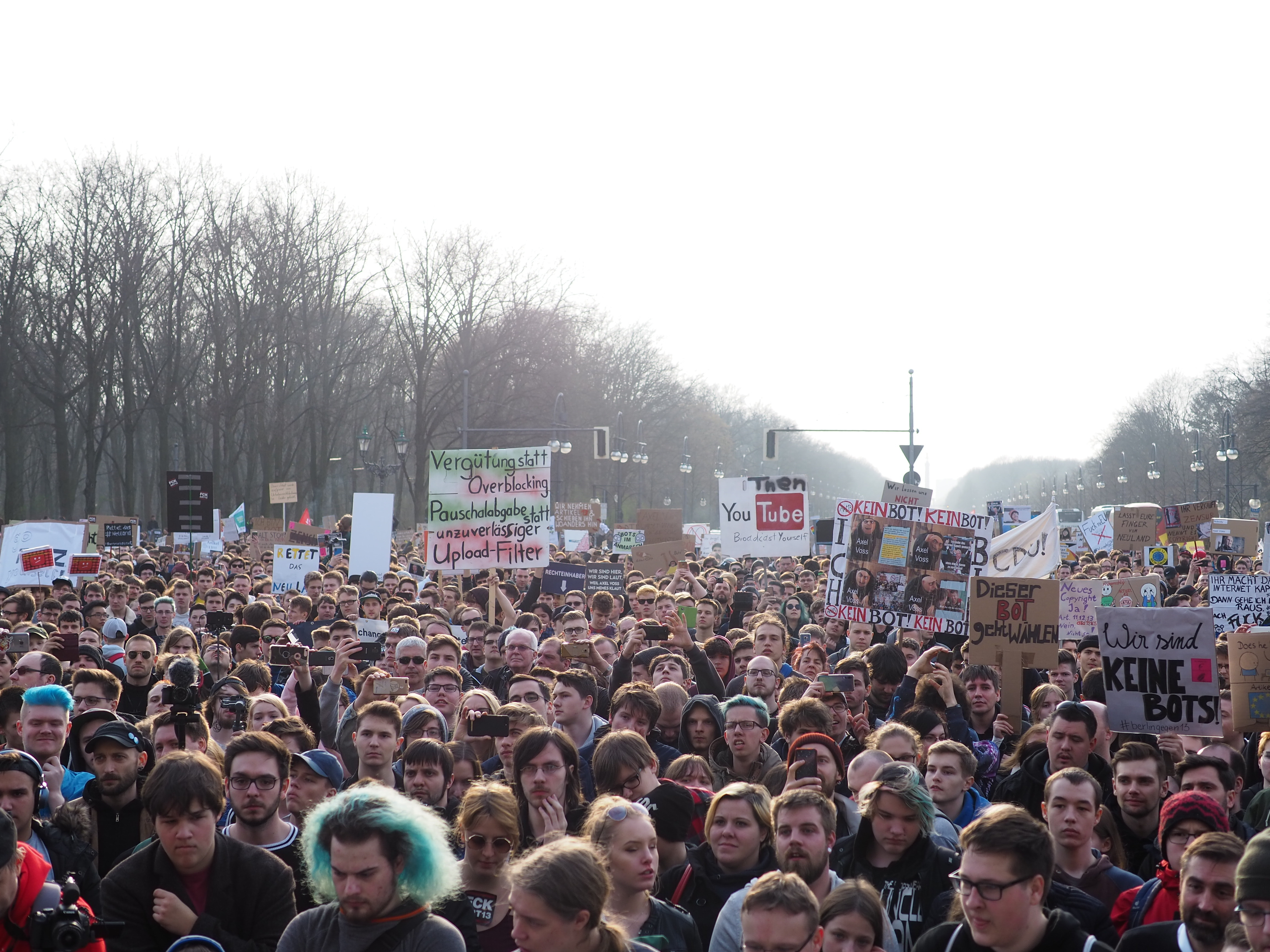 Many of the signs included memes, or the statement “we are not bots,” which appears to have confused some in the media, such as DW.com, which claimed people said: “banners included the phrase “We are not bots,” a reference to robotic-like social media posts.” Uh, no. The reference to “we are not bots” is in direct response to supporters of Article 13 lying and claiming that all of the arguments against Article 13 were simply coming from internet bots as a way to discount the concerns of millions of EU residents as well as those of use around the world. 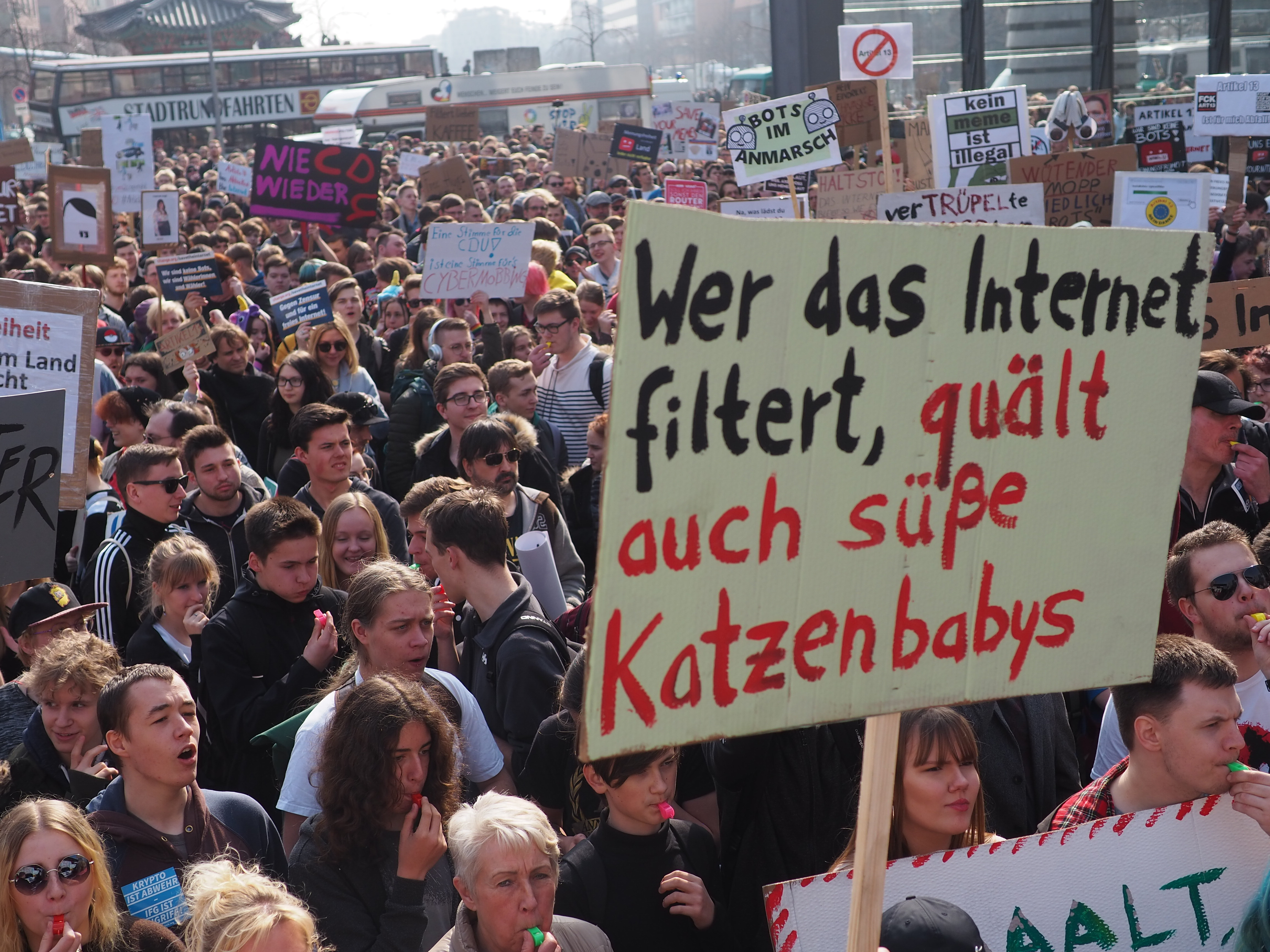 Of course, what happens when the politicians who insisted it was “just bots” arguing against Article 13 have to contend with the fact that at least 150,000 real live humans showed up on their doorstep to protest? They just keep lying. German MEP Daniel Caspary, who chairs the large CDU/CSU group in the EU Parliament told a German publication a completely made up lie — reminiscent of the kind of “fake news” propaganda that has been used elsewhere, that all of the protesters were actually paid to be there. He literally called them “bought protesters” and said that a non-profit organization offered protesters €450 to show up at the protest. And then insisted that this was all a threat to democracy (per the translation):

“Now it is obviously being attempted to prevent the adoption of copyright even with bought protesters. Up to 450 euros are offered by a so-called NGO for the demonstrators. The money seems to come, at least partially, from major American Internet corporations. When American corporations with massive use of disinformation and bought protesters try to prevent laws, our democracy is under threat. ”

Think about that for a second. A major political leader is so infatuated with his false belief that real people couldn’t possibly be upset about the plan to fundamentally move away from an open internet, that he insists Google must have paid the protesters €450 each to show up. That’s insane, and nothing that any elected official should be saying. Journalist Emanuel Karlsten looked into the details of this and found that Caspary had taken a completely different bit of information and used it to attack the integrity of all the protesters. What had really happened was a few weeks earlier, the digital rights organization EDRi had offered to cover travel costs for a small number of activists to come talk to MEPs. It was not for the demonstrations, but for a small group of activists, who otherwise could not afford to meet the MEPs in person, to travel. Somewhere around a dozen such grants were made and it allowed this small group of folks to meet with MEPs last week, totally unrelated to the protests.

As more and more people started calling out Caspary, he refused to correct his misleading statement for an entire day, before insisting that everyone misunderstood him and he never really mean that all demonstrators got paid. However, the “statement” he links to is simply more pro-Article 13 propaganda, insisting that the protesters cannot be taken seriously because some idiot sent Axel Voss a death threat. Meanwhile, Caspary’s own thread that he insists is clarifying his position then immediately says we should still criticize financial support for those seeking to lobby politicians. He says that as if the lobbyists in favor of Article 13 didn’t also provide “financial support” for some musicians and creators to go lobby them as well. It is standard practice for NGOs to pay travel costs for activists to present their position before elected officials, because otherwise politicians would only hear from lobbyists, and not from the actual people. This happens on all sides of every issue — and it’s not paying them for their testimony, but for their travel expenses to get somewhere they couldn’t otherwise go.

So I’m curious if Caspary will now agree to discount any lobbying he heard in favor of Article 13 from artists who received travel support to go see him too? Or does his position only cover the other side? 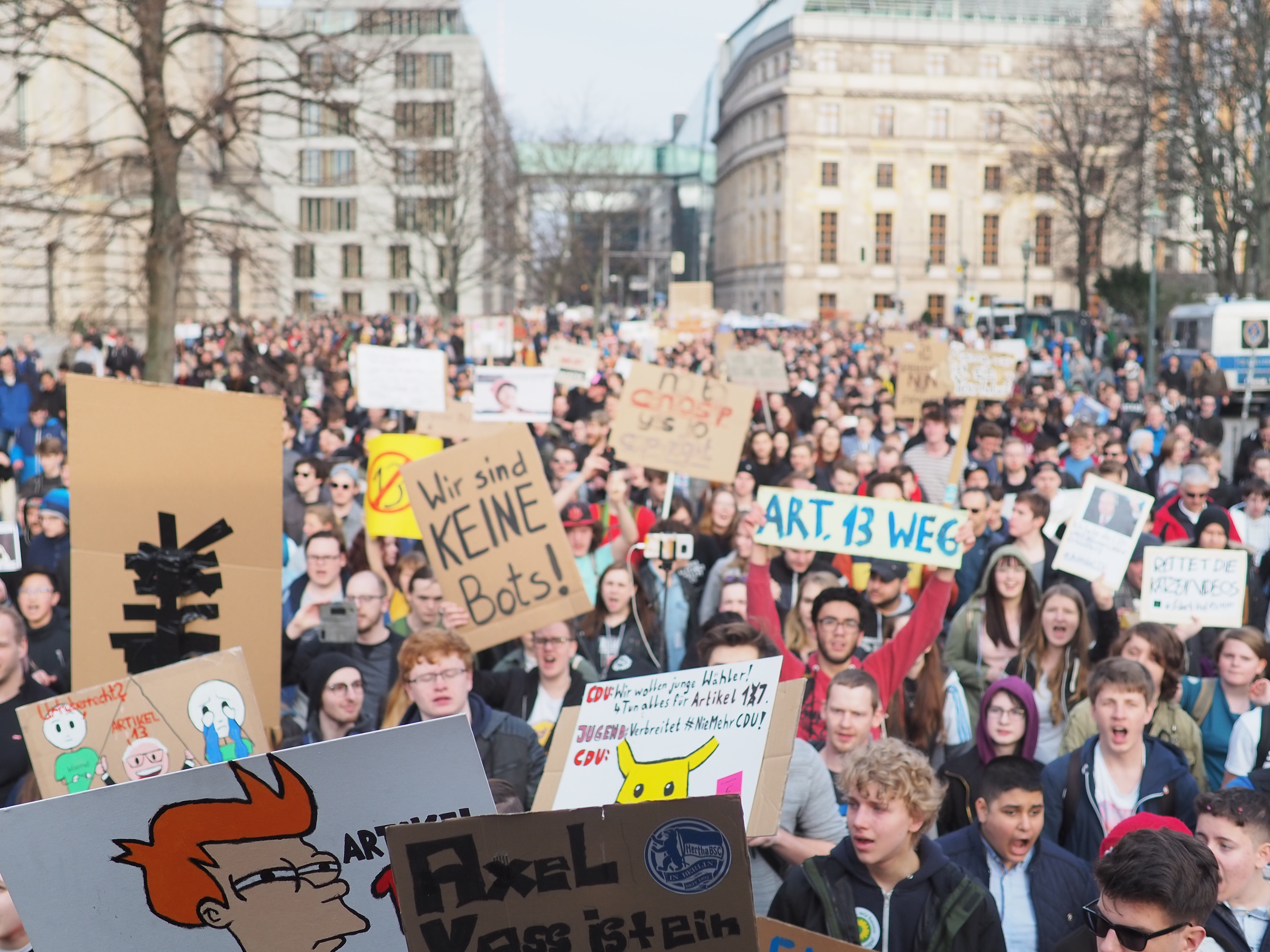 Meanwhile, as Communia noted, in quite a contrast, at the same time as these protests were happening across Germany and elsewhere, in France, supporters of Article 13 — the execs from collection societies who stand to profit (literally) the most from the passage of Article 13 — gathered to drink champagne and hold up little yellow pieces of paper in support of the law:

summary of the #Copyright debate: While across ?? more than 100.000 citizen protest against #Article13, collecting society executives are holding up little yellow papers in support of the directive, while zipping champagne at the Paris book fair. #SaveYouInternet #Artikel13Demo pic.twitter.com/hvCg7RuUyB

You really should click to open the images and to see the contrast. Thousands upon thousands of people take to the streets to protest against a law that will close off the open internet, while those who will profit from such a closed internet sip champagne at a private party and smile meekly while holding up pieces of paper in support of screwing over the public. How nice.

Either way, no matter what lies politicians tell themselves, they might want to think about so many people coming out to protest over this issue, especially given that the next EU Parliamentary elections are in just a few months. Or will they just claim that Google paid them to vote, too? 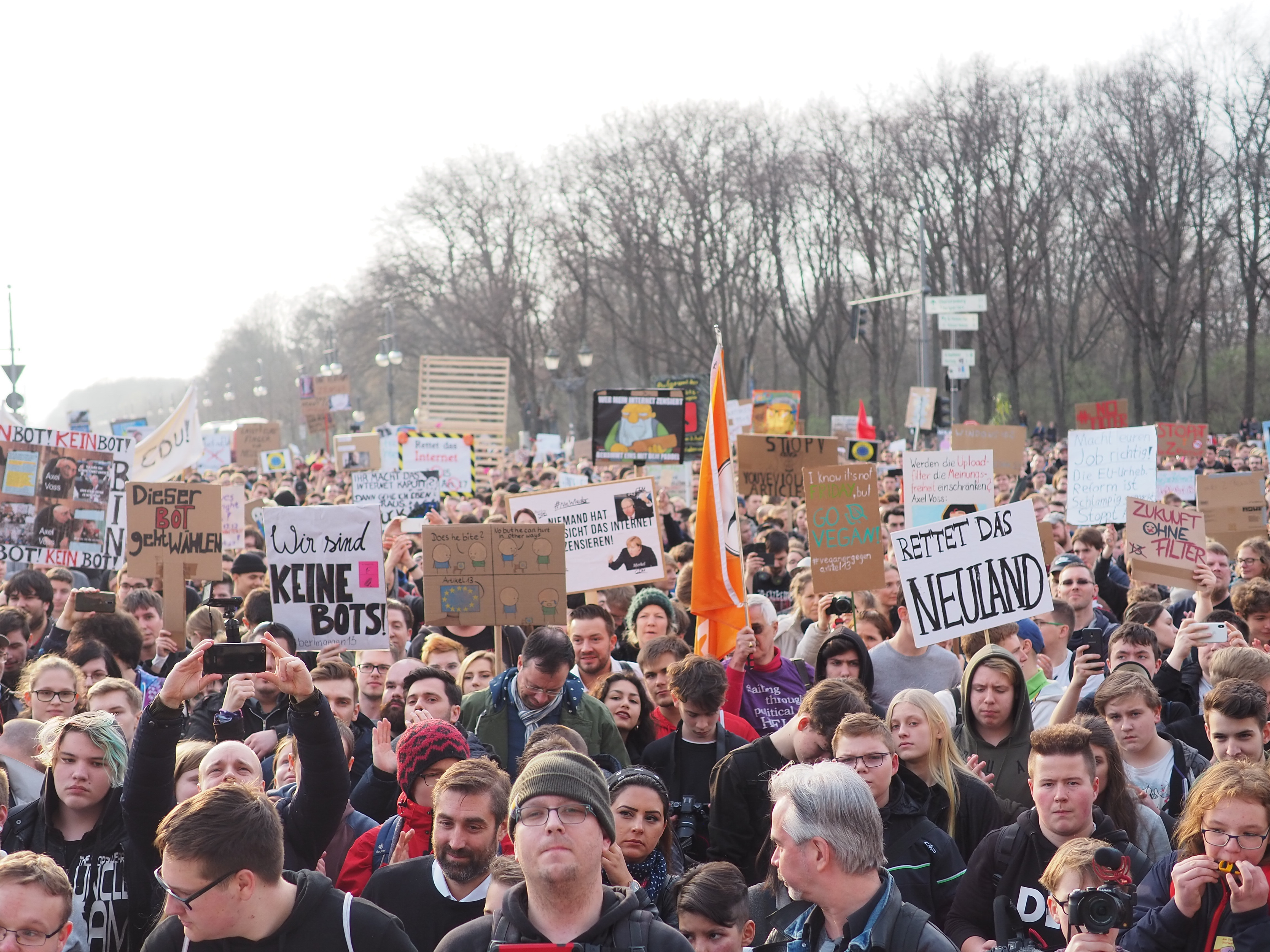 All images in this post come from Netzpolitik, which says they are free for anyone to use — which may only be true until Article 13 is enacted into law, at which point, it would be an impossible liability risk to continue posting them on most sites.