We’ve got a double winner this week, with a comment from Bloof taking the first place spot for insightful and the second place spot for funny. It’s a pretty comprehensive response to the allegations of fraud in the 2020 election:

Voter fraud that only happened in the parts of the ballots and the states that went against Trump, not the house and senate races where an unassailable democratic majority would be incredibly useful, only the top ticket featuring a massively unpopular republican candidate. Voter fraud so cunning that it only happened in cities filled with minorities among whom Trump is about as beloved as porcupine skin toilet paper. Voter fraud so cunning it somehow managed to happen in places where republicans controlled the elections. Voter fraud so cunning the Trump team have been unable to present any evidence of it whatsoever and had their legal teams back down the moment any judged asked them for actual proof because they don’t fancy parroting the same lies they vomit on TV in a place where there’ll be consequences for lying. Voter fraud so cunning that republican donors are suing the groups they funded that claimed they’re able to prove it happened, for not being, in fact, able to prove anything. Voter fraud so cunning even the most hyper partisan right wing ‘news’ outlets like Fox and Newsmax issued on multiple on air retractions the moment the election machine companies got the lawyers involved because their stories were based on 4chan posts and the say so of the son of the guy who runs notorious pedophile and Qanon hangout, 8kun.

They have no evidence, there is no evidence, it did not happen and screaming and committing acts of terrorism will not make your far right fever dreams of fraud and persecution into a reality. They had ample opportunity to present evidence in front of friendly TV hosts like Tucker Carlson, as well as judge after judge after judge, some of which were appointed by Trump himself and they showed nothing and their cases were rejected every single time.

It is clear to everyone with even a lick of common sense that the people parroting these lies are so full of sh*t even the Trump gutted EPA would consider them for a potential superfund site.

In second place on the insightful side, it’s Stephen T. Stone with a response to Josh Hawley freaking out about his publisher dropping his book:

A reminder for those who need it

For editor’s choice on the insightful side, we’ve got a pair of comments from That One Guy. First, it’s a response to tiresome attempts to equate this week’s events with the summer’s protests:

GIve me a minute, I’m sure it’ll come to me

Let’s see, protests against police brutality and a legal system that treats certain people as second class citizens, versus a ‘protest’ against the fact that the ‘wrong’ person won an election that involved an attempted insurrection to overthrow the democratic process, there’s something different between these two but I just can’t place my finger on it…

Next, it’s a comment expanding on the point that Section 230 protects both big and small sites:

‘Their pocket-change is your entire site’s budget’

Not just protects big and small, it protects small businesses way more than it protects big ones. Gut 230 and Facebook will have some extra expenses to deal with but they’ve got the resources to do so, whereas smaller companies that might compete with them, either now or in the future are going to be screwed as they lack the needed resources and are forced into the position of either crippling themselves if not shutting down entirely.

It’s the ultimate irony that when dealing with the people attacking 230 the companies they like to hold up as boogiemen and justifications to gut the law are the very ones that stand to gain the most by it’s removal.

Over on the funny side, our first place winner is Thad with a comment on our post about how easy it will be to identify insurrectionists thanks to them posting all their activities on social media. The comment comes in the form of a link to a frame from The Simpsons, so I’ll replace it with the image itself: 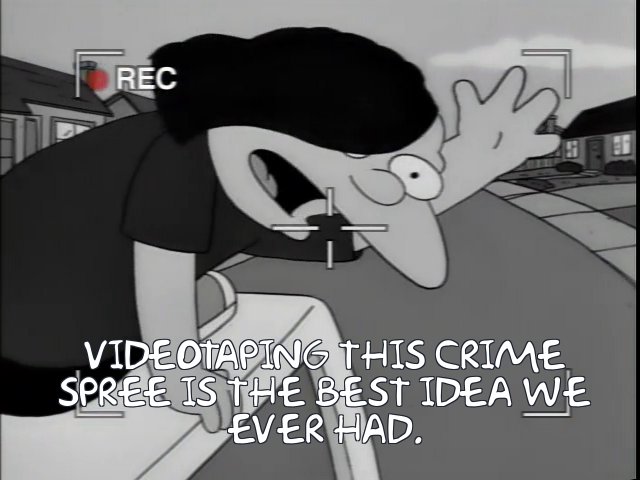 We’ve already had our second place winner above, so it’s on to the editor’s choice and a comment from Crafty Coyote about a circuit diagram being spread with claims that it’s a 5G chip inserted in the COVID vaccine, but which turned out to be schematics for a guitar pedal:

So if the implanting chip really is just the schematics for a guitar pedal, does that mean we’ll be getting The Cure when we get the cure?

This is a disaster! How will scientists be motivated to collect data if their great-grandchildren can’t cash in on the copyrights? How will they pay for their supercolliders, supercomputers, and vacation homes? How can they keep individuals from inferior races from doing science also?

And just imagine, some of the data might be chanted by a rapper without attribution. Or used to remote-control a John Deere tractor.

Stand up and stop the madness! Send your anti-proton to CERN now!