Source: Techdirt.com
We’ve already made it clear that we’re quite concerned about how freedom of expression will fare under President Trump. He has a long history of threatening and/or suing those who cover him factually, but in a manner he dislikes. And while he hasn’t (as far as I can tell) threatened to sue anyone since the election, he appears to have become somewhat obsessed with the NY Times. Since winning the election he’s tweeted at least six times about the NY Times, insisting (incorrectly) that it was losing subscribers and (incorrectly) that it had “apologized” to readers for its Trump coverage. He also claimed (incorrectly) that it had said he hadn’t spoken to foreign leaders — when the actual article just said that his conversations with foreign leaders happened without State Department briefings (which is fairly stunning). Here’s what the NY Times said:

One week after Mr. Trump scored an upset victory that took him by surprise, his team was improvising the most basic traditions of assuming power. That included working without official State Department briefing materials in his first conversations with foreign leaders.

But Trump claimed something entirely different: 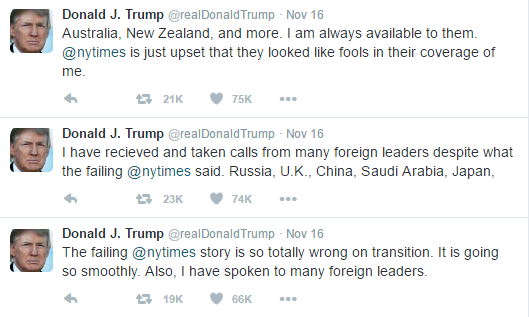 And, yes, I know that there are some folks who just flat out hate the NY Times and think that it lies and such. And I’ve certainly complained my fair share about weak or misleading coverage by the NY Times over the years, but it’s still problematic when a President or President-elect is directly attacking any publication. It creates serious chilling effects on reporters. And, it can be even worse than that. As Yashar Ali noted in a Twitter thread, attacking a company as “failing” has real consequences, especially one that is traded on the public markets, potentially harming all sorts of everyday investors. 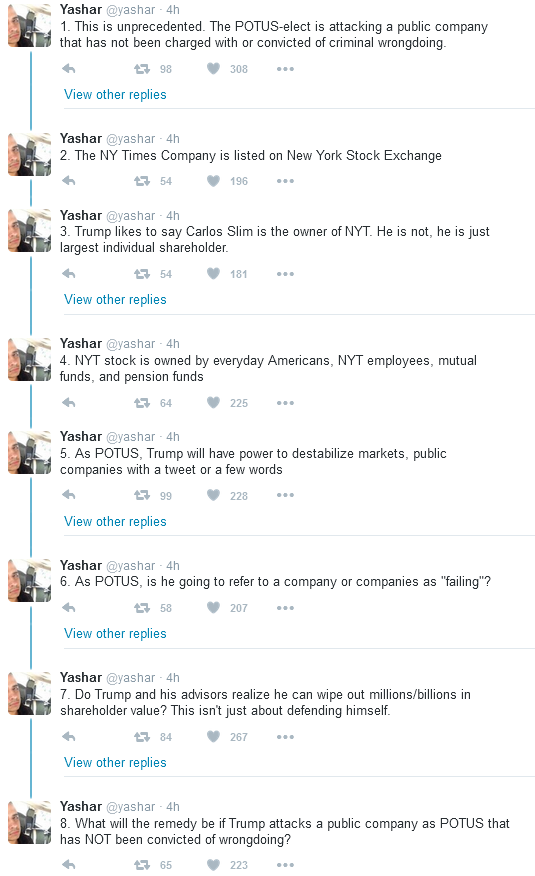 I’m guessing that many who just hate the NY Times won’t care about this, but it is serious. There’s a reason why Presidents don’t go around attacking companies or saying that they’re “failing” or that their business is in trouble. Because that has real consequences. I still don’t think that journalists should be suing Trump for defamation, as some have suggested, but it would be nice if our President-elect recognized that going around and attacking the press — even if he disagrees with its coverage — is entirely inappropriate.

Selection for production-related traits in Pelargonium zonale: improved design and analysis make all the difference

Antigua Says It Will Certainly, Absolutely, Definitely Use WTO Permission To Ignore US Copyright And Set Up A Pirate Site, Maybe

Source: Techdirt.com One of the longest-running, and most extraordinary, sagas on Techdirt concerns the island…