While the United States finally passed net neutrality rules this year, the FCC’s decision to not ban zero rating (exempting some content from usage caps) has proven to be highly problematic. ISPs like Comcast, AT&T and Verizon have all begun exempting their own content from usage caps, putting competing services like Netflix, Amazon and Hulu (or smaller startups) at a disadvantage. The loophole has also spawned new confusing options from Sprint that throttle games, music and video by default, unless a consumer is willing to pony up $20 or more extra to have those services actually work as intended.

So yes, the United States passed net neutrality rules, but its unwillingness to tackle zero rating means that net neutrality is now being hamstrung anyway — now just with regulatory approval.

Like the United States, Canada took a “wait and see” approach to zero rating, but is holding a week full of hearings to debate whether zero rating should be allowed long term. Net Neutrality advocates note that if you’re giving one content or service cap-exempt status, you’re automatically putting competitors, smaller startups, non-profits, or educational outfits at a disadvantage. But just as in the States, some Canadian ISPs are trying to claim that zero rating will make broadband service less expensive:

Also just like in the States, telecom industry insiders are trying to claim that it’s those that support net neutrality that are driving up consumer costs by opposing zero rating:

With #EndDataCaps & ban on #ZeroRating, looks like @OpenMediaOrg proposals will raise consumer costs. Whose interests is it looking out for?

Right, exept it doesn’t work like that. Usage caps aren’t really necessary on fixed-line networks. They’re utterly arbitrary price hikes, only made possible thanks to a lack of competition in the first place. Once in place, caps then allow incumbent ISPs to zero rate their own content while still penalizing Netflix, adding an entirely new anti-competitive layer to the mix. That’s why Finland, Norway, Slovenia, Chile, India, and the Netherlands have simply banned zero rating entirely, realizing it’s a slippery slope that unfairly empowers incumbent players. That any part of this mechanism is good for consumers is a fallacy.

In fact, a study by Finland-based research firm Rewheel points out that wireless carriers in the EU and other OECD nations that don’t zero rate video wind up giving consumers eight times as much data for the same price as carriers that do: 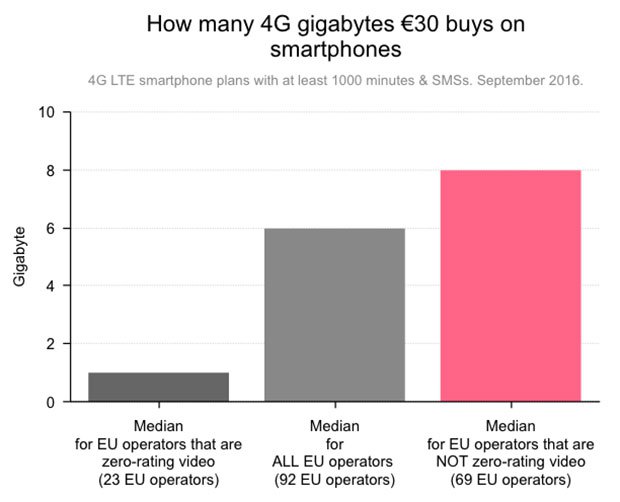 Those trying to claim that zero rating drives down costs for consumers are effectively trying to convince you that “price hikes in uncompetitive markets lower prices.” Don’t believe it.

It’s also worth pointing out that Canadian incumbent Rogers, historically one of the clumsiest net neutrality violators in Canadian history, is opposing zero rating during this week’s hearing:

“But not all companies agree. David Watt, senior vice-president of regulatory matters for Rogers, says the company is net-neutral. “The customer should make the choice.”
Critics of differential pricing point out that while promoting a service might be attractive to consumers who use it, using a service or app that isn’t preferred could create overage charges. That would have a huge impact on the success of those businesses, and it could slant user behaviour.”

Why is Rogers opposed to zero rating? Because it got a first-hand look at the concept’s shortfalls when the company’s streaming radio stations had a hard time getting cap-exempt status from a different Canadian incumbent last year. In other words, these telecom giants are all for any variation of network and service discrimination, as long as they’re the ones doing the discriminating. Turn the tables on them, and they’re consistently quick to cry foul.

While Canada is holding a bunch of hearings, that’s certainly no indication they’ll actually ban the practice. Unlike more ham-fisted net neutrality violations (like blocking a website or service entirely), zero rating tends to fly under the media’s outrage radar. That’s in large part because consumers and many tech outlets have been fooled into believing that zero rating is giving users something for free, oddly while those same users are simultaneously paying some of the most expensive mobile broadband prices in all developed nations. Less consumer outrage means less political pressure to ban the practice, resulting in a massive leg up for powerful incumbent broadband providers.